Great strides have been made in the areas of diagnosing and treating clinical depression. For this we should be thankful for God’s grace and common grace that allows for discoveries into the human heart and psyche.

However, much wisdom in this area can also be gained by looking into various writings within the last 400 years or so. Recently I came across one such resource contained in the book written by Archibald Alexander titled, “Thoughts on Religious Experience.” Alexander was one of the founders of Princeton, which originally existed for the equipping and training of those who would be pastors. He was brilliantly insightful into the Christian life and all that entails, including the work of the Holy Spirit in the human heart.

In one chapter Alexander discusses some of the various spiritual and psychological maladies which we can encounter, including deep depression. This chapter mentions several prominent Christians who struggled greatly with depression and how they worked through such dark nights of the soul.

A very prominent focus of this chapter contains the insights of Rev. Timothy Rogers. Here is how Mr. Alexander described his condition: About the close of the seventeenth century, the Rev. Timothy Rogers, a pious and able minister of London fell into a state of deep melancholy; and such was the distressing darkness of his mind that he gave up all hope of the mercy of God and believed himself to be a vessel of wrath designed for destruction, for the praise of the glorious justice of the Almighty. As can be imagined, many interceded in prayer on his behalf and God did grant Rev. Rogers complete deliverance from his debilitating condition.

As a result of what he went through, Rogers published many treatises concerning what depression looks like and some of its causes. One of his most helpful treatises centered on how to be a blessing to those who were suffering from depression. I will quote here his insights.

“1. Look upon your distressed friends as under one of the worst distempers to which this miserable life is obnoxious. Melancholy incapacitates them for thought or action; it confounds and disturbs all their thoughts and fills them with vexation and anguish. I verily believe that when this malign humour is deeply fixed and has spread its deleterious influence over every part, it is as vain to attempt to resist it by reasoning and rational motives as to oppose a fever, or the gout, or pleurisy….”

“2. Treat those who are under this disease with tender compassion. Remember also that you are liable to the same affliction, for however brisk your spirits and lively your feelings now, you may meet with such reverses, with such long and sharp afflictions, as will sink your spirits….”

“3. Never use harsh language to your friends when under the disease of melancholy. This will only serve to fret and perplex them the more, but will never benefit them….”

“4. If you would possess any influence over your friends in this unhappy state of mind, you must be careful not to express any want of confidence in what they relate of their own feelings and distresses. On this point there is often a great mistake….”

“5. Do not urge your melancholy friends to do what is out of their power. They are like persons whose bones are broken and who are incapacitated for action. Their disease is accompanied with perplexing and tormenting thoughts; if you can innocently divert them, you would do them a great kindness, but do not urge them to anything which requires close and intent thinking; this will only increase the disease….”

“6. Do not attribute the effects of mere disease to the devil; although I do not deny that he has an agency in producing some diseases, especially by harassing and disturbing the mind to such a degree that the body suffers with it. But it is very unwise to ascribe every feeling and every word of the melancholy man to Satan, whereas many of these are as natural consequences of bodily disease as the symptoms of a fever, which the poor sufferer can no more avoid than the sick man can keep himself from sighing and groaning….”

“7. Do not express much surprise or wonder at anything which melancholy persons say or do. What will not they say who are in despair of God’s mercy…?”

“8. Do not tell them any frightful stories, nor recount to them the sad disasters which have overtaken others. Their hearts do already meditate terror, and by every alarming thing of which they hear they are the more terrified, and their disordered imagination is prepared to seize upon every frightful image which is presented….”

“9. Do not, however, think it needless to talk with them. But do not speak as if you thought their disease would be of long continuance, for this is the prospect which appears most gloomy to the melancholy….”

“10. It will be useful to tell them of others who have been in the same state of suffering and yet have been delivered. It is, indeed, true that they who are depressed by such a load of grief are with difficulty persuaded that any were ever in such a condition as they are….”

“11. The next thing which you are to do for your melancholy friends is to pray for them. As they have not light and composure to pray for themselves, let your eyes weep for them in secret, and there let your souls melt in fervent holy prayers….”

“13. Put your poor afflicted friends in mind continually of the sovereign grace of God in Jesus Christ. Often impress on their minds that he is merciful and gracious; that as far as the heavens are above the earth, so far are his thoughts above their thoughts—his thoughts of mercy above their self-condemning guilty thoughts….”

Over the next few blog posts I will interact more with some of these principles, but I hope that, like me, you are sufficiently impressed with the insights of this dear brother. I also hope and pray that you will find insight and encouragement to walk with your loved ones who are suffering.

Get your copy Today! 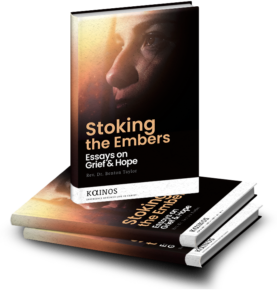